I headed to the mountains to go hiking by myself after work the other day.  I planned to hike to a waterfall along the Wasatch bench, but as I drove, it felt right to go instead to a canyon I had seen in a friend’s Facebook post.  I didn’t remember the canyon’s name, but I knew where it was and though I did not know for certain, I had a vague idea of how to get to the trail head.  After passing Big Cottonwood canyon, I just went by what felt right—what my inner voice was telling me to do.  A left here, up the hill, a left there, a right here, and—found it.  At the trail head, I was reminded of the canyon’s name: Ferguson.

From the first part of the trail there is a fabulous view of the Salt Lake Valley.  I’m sure it will be even better after a rainstorm.  There are also some large, steep rock formations up the canyon, some completely vertical.

I came upon some climbers and watched them for a bit.  According to RunKeeper, I had gone about one mile (my phone lost GPS signal at some point, so I think it was actually further), at which point I decided I should turn around so I could make it home in time to play Ultimate.  As I headed down, I encountered a local group of cub scouts heading up.  One of the leaders lives one street over from me.  We said hello and chatted a bit, then I was about to continue down, when another leader arrived from below.  He said, “He’s just going to wait there.”  They had with them a special needs young man who was ill-equipped for the steep, rocky, sandy terrain.  He thought he was going on a short, almost flat hike around Silver Lake near the Brighton ski resort.  Instead, he was facing this: 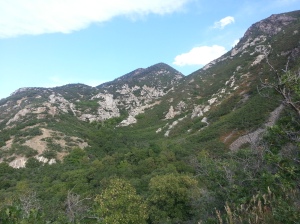 He had basketball shoes on, no socks, and his shoes weren’t tied.  He kept slipping on the loose rocks on a particularly steep part of the trail, and he’d had enough.  I knew the young man; I’ve coached him in church basketball and given him rides home from basketball.  My neighbor suggested perhaps I could give him a ride home.

As the prophet Alma taught his wayward son Corianton, “that which ye do send out shall return unto you again, and be restored” (Alma 41:15 (12-15)) Having received so many rides when I did not have a driver license, I chose to give this young man a ride home, “sending out” that which I already received.  One of the leaders came partway down with me, the two of us helping this young man down, as he had lost his confidence from all the slipping.  This leader wanted to make sure I was okay with giving him a ride home, so I explained I am grateful that I am now in a position where I can pay those rides back.

It turned out that there was not enough communication to get enough people out to play Ultimate.  Had I known there would be too few people to play while I was up Ferguson Canyon, I would have continued up the canyon, and thus not have been there to help.  This lack of communication, once I was in Ferguson Canyon, had a causal effect on me being there to help.  However, the fact that I was in Ferguson Canyon at the right time to help had three contributing factors: I wanted to go hiking, I got off work a bit early to do so, and I listened to “the still, small voice” within me regarding where to go.  The young man I helped commented, “It’s really lucky that you’re here to help me.”  I submit that it was serendipitous by the original definition, on account of me having the sagacity to listen to the still, small voice, though I was not seeking an opportunity to help others at the time.  I also submit that my desire and plan to play Ultimate, my desire and plan to go hiking after work, and my desire to help others came together in a fit of synchronicity making a meaningful relationship between my activities that afternoon and evening.  The Wikipedia article on synchronicity says “From the religious perspective, synchronicity shares similar characteristics of an ‘intervention of grace’.”  Indeed, for my young friend, there was an intervention of grace that day.

One response to “Serendipity, Karma, and Synchronicity”